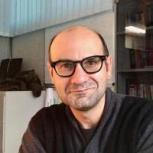 I received my degree in Philosophy of Language from the University of Turin, Italy, in 2000. Since then I have been working as researcher in FBK - Fondazione Bruno Kessler, (former ITC-irst - Center for Scientific and Technological Research), in the Human Language Technology group.

I co-authored about 100 scientific papers, and I regularly serve as program committee member and peer reviewer for national and international conferences and journals.